This is Part II of a 3-part blog post on how I configured my working environment. Here I’ll explain how to configure Windows Subsystem for Linux (WSL) and Docker.

Since Microsoft announced WSL, Windows 10 became a possible alternative to Linux and MacOS for software development. WSL combines the advantages of having a Linux Kernel backend (running Python, bash etc.) and a Windows graphical frontend, e.g. for working with Visual Studio Code.

WSL1 or WSL2? There are two types of WSL available. It depends, which one is best for your needs. Most users will select WSL2.

Personally, I still use WSL1 because I keep most of my files organized on the Windows side, and the performance drop is considerable between WSL1 and WSL2 in this case.

You can convert back and forth between WSL1 and WSL2. It is possible to run WSL1 and 2 distros in parallel. Docker can only run, however, in either WSL1 or WSL2 mode and switching results in a complete wipe of containers.

Setup of WSL is pretty straight forward if you use the Linux images available from the Microsoft Store. However, this is not always possible - e.g. if you’re running Windows 10 Education, the Microsoft Store may be disabled for reasons of security. With LxRunOffline, it is possible to set up WSL with any Linux image, and also chose where WSL default folder is located.

Even if your App Store is available, I suggest using LxRunOffline for WSL setup, primarily because it provides open sourced independence of Microsoft.

To install LxRunOffline, I prefer Chocolatey package manager. But you can also install lxrunoffline manually.

Click Start and in the Search box, type cmd.exe. Do not press Enter. In the search results window, right-click on the program cmd.exe and in the pop-up menu, select Run As Administrator.

If you have choco, run the following to install LxRunOffline.

Decide whether to use WSL1 or 2

See the section at the end of this page for instructions to switch between WSL1 and WSL2. If you do nothing, (I believe that) WSL1 will be used as default.

Here, I use the Ubuntu Focal Fossa image.

The file name will be similar to ubuntu-focal-core-cloudimg-amd64-root.tar.gz.

Run the following command to install this image in WSL:

By filling up the precise absolute path to the ubuntu-bionic-core-cloudimg-amd64-root.tar.gz file, the command will create a distribution named as UF, in directory c:\WSL\UFull

You can open the WSL Bash by creating a Shortcut, e.g. on your Desktop, with the following Target:

(the path may be different, depending on how you installed lxrunoffline)

Once you opened WSL bash, check your installation with: lsb_release -a. It should output something along these lines:

If the following error occurs:

After several setups of WSL with lxrunoffline, I also noticed that the steps above may slightly vary, depending on the versions used. Here are some additional steps that may be required to follow the instructions below:

I also recommend adding a password to user root. The password doesn’t have to be bullet proof, since you’re working in WSL inside Windows, which provides the main security layer. I’d recommend using a simple, easy to remember password that can be typed fast here. Set password with:

Add WSL to your right-click menu

If you are going to install WSLtty (see below), you don’t need this. 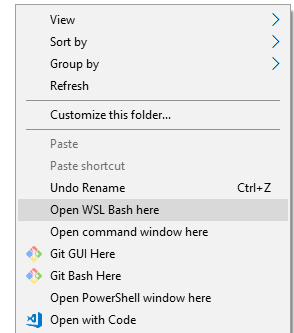 We want to be able to open WSL console from any folder location. To achive this, we add WSL to the right click context menu with the following steps.

First, open the registry editor by pressing the Windows key, typing “regedit” into the Start menu, and pressing “Enter”.

Navigate to the following key:

You are done. You can now right-click a folder in File Explorer and select “Open WSL Bash here” (or whatever you named the option) to quickly open a Bash shell to that specific folder. This option will appear immediately, so you don’t have to sign out or reboot first.

You don’t want to work with the root user by default.

Follow the steps below to create a new user account and give it sudo access. If you want to configure sudo for an existing user, skip to step 3.

According to this issue, WSL sometimes starts with the wrong user account (e.g. you don’t want to use root by default). To correct this, first find out which user-id you need to provide (in WSL terminal):

Then use the given uid to update the default user (in Windows Command Line):

If you later wish to start with the root user, e.g. to fix startup issues:

By default, folders outside of WSL will have a /mnt/ in front of the actual path (because external paths are mounted into Linux WSL). This makes working with WSL a bit cumbersome, we can remove this /mnt/ with a WSL configuration file.

This is rather open ended, but there are some packages that you may want to install and configure such as locales or configuration of time zone.

You want to be able to run docker-compose and docker client from WSL, but the backend needs to be run through native Windows 10 Docker Server. Therefore, install Docker Desktop for Windows 10 first.

A secure connection between WSL1 and Docker Desktop is available through socat1 and npiperelay.

The steps to set up npiperelay:

You need to use your Windows username (/c/Users/<username>).

Export your user name as a variable:

Get npiperelay.exe from Github releases, build, and store in Windows user directory:

Symlink npiperelay.exe from Windows to WSL1:

Get docker-relay script and run as background task:

We modify docker-relay so it starts the Socket inside the user directory.

Add the following. Replace {username} with your WSL user name.

Store with CTRL+O. Test it with:

To autostart the relay, we need to add these lines to ~/.bashrc:

Finally, some commands may use sudo to start docker. In this case, DOCKER_HOST will not be available. Modify sudoers to keep this entry:

and add the following line:

In Docker Desktop (Windows), under Shared Drives, select the drive where you keep your project folders (e.g. docker-compose.yml etc.). 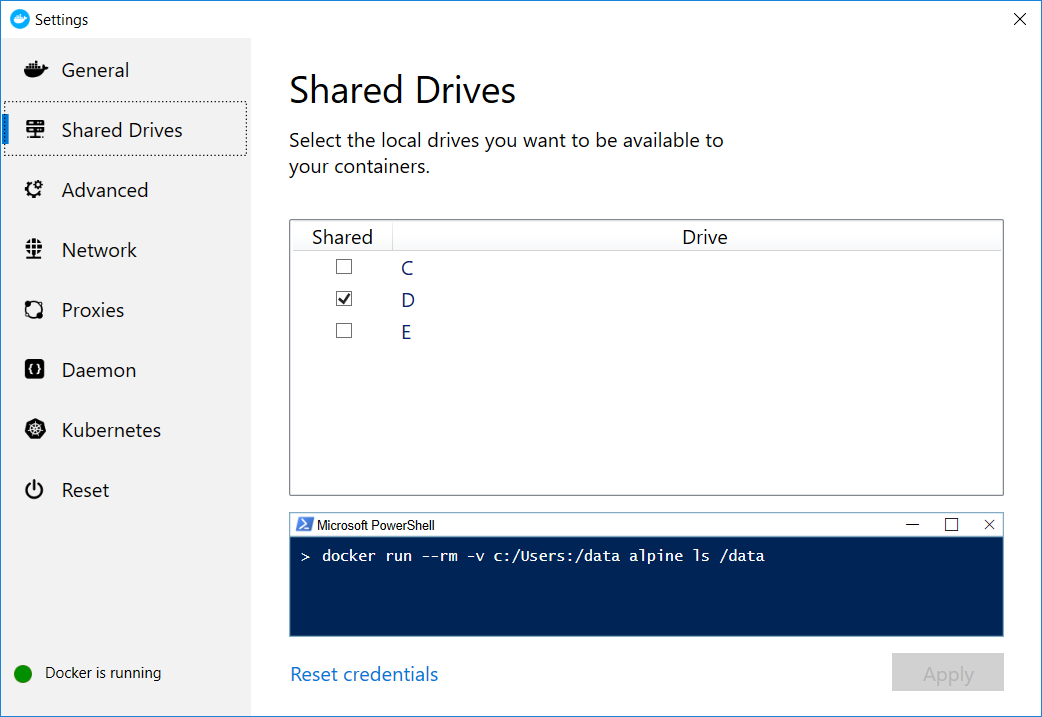 This will allow docker from WSL access files on this drive, which is necessary if you want to execute docker-compose in a folder on d:.

I’ve also changed some of the Resource/Advanced settings to fit my needs: 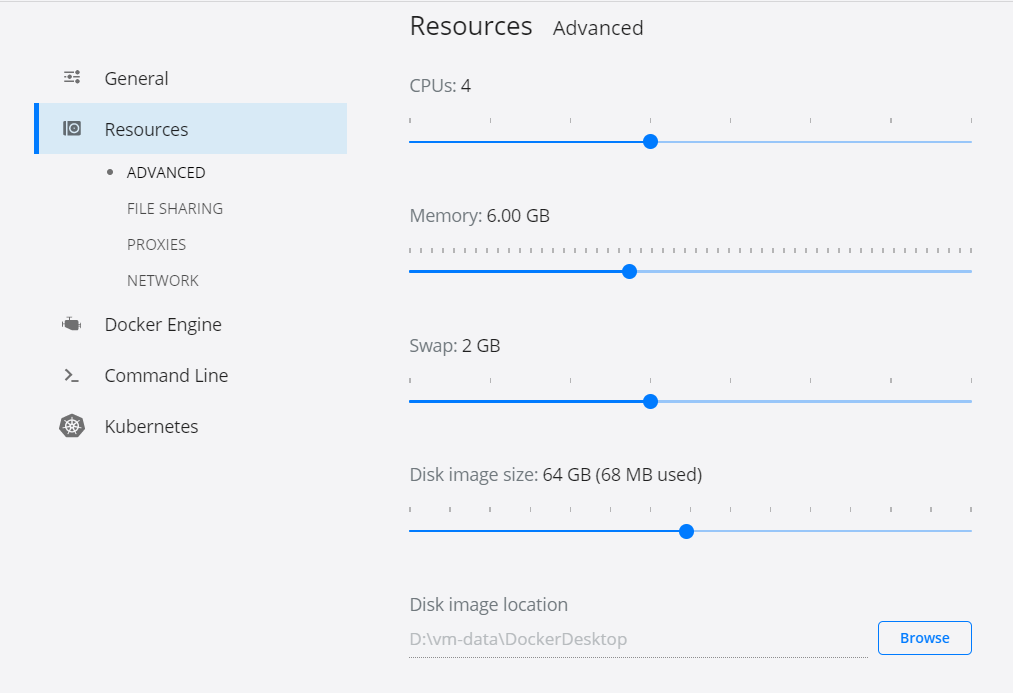 As you can see, I’ve also changed the location where Docker stores my virtual containers to D:

From now on, we’re working in the WSL bash (open with right-click and Open WSL bash here).

You should follow the official docker-compose installation instructions in linux.

Optionally, follow these instructions to configure docker-compose to run as non-root user.

Keep WSL distro up to date

To upgrade your WSL installation and packages, use:

There seems to be a bug, where Docker on Windows 10 may see errors similar to this after restarting the computer:

The steps described below may solve this issue.

How to disable fast startup on Windows 10

Disable it in just a few steps:

Now this may occur on very few occasions, only for WSL1 - for me it happened mainly when building python packages (e.g. setuptools, distutils, pypi). Since the latest Windows Update, some access rights changed and those affect how packages in WSL can access folders. 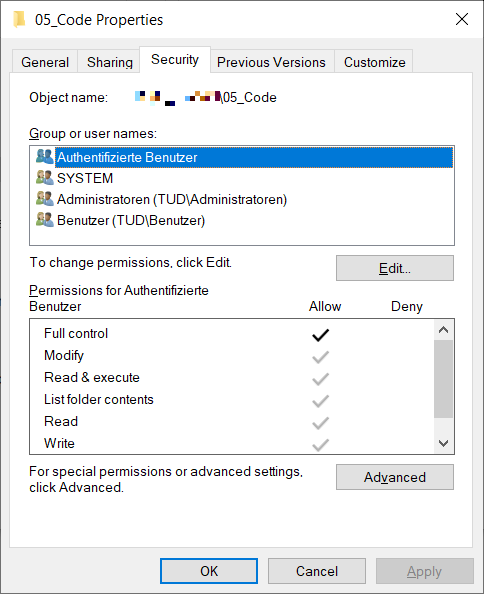 Good things to know when working with WSL-Bash

E.g. anything below C:\WSL\UFull is holy Linux territory that should never be touched from Windows. Windows will mess with Linux file permissions, which is quite difficult to fix afterwards.

Use Ctrl + D to exit the current shell.

The .bashrc file can be used to add aliases for commands. The following instructions will add an alias update_wsl that will update WSL.

Add the following line at any position:

The default Ubuntu Terminal is fine for most situations. If you like to optimize workflows, it can be tempting to check some of the other WSL Terminals available for WSL, such as MobaXTerm, ConEmu or Hyper.

I’ve changed to wsltty because this terminal is small, has a lot of nice features that help reduce daily work, and there are many nice themes available.

You can install wsltty with choco:

Some things you may want to do after installation:

A nice addition to wsltty is byobu - it is a “window manager and terminal multiplexer”: the important part is that

Start it with byobu. Here’s a list with the most frequent shortcuts I use:

When you close WSL and reopen it later, type byobu and you’ll have all your Sessions still running.

Use LxRunOffline, to back up (or restore) your WSL distro in/from a tar.gz file.

Optionally, clean up the tmp folder, before backing up:

Then, shutdown WSL and store or load from .tar.gz.

You can upgrade distros from WSL1 to WSL2 (and vice versa). It is a good idea to make a backup before upgrading.

Use cmd for the following commands.

This may happen for various reasons. In my case, hard links used in ruby gems caused this failure.

After removing all gems, conversion did work.

If you used WSL1 before, there may be an entry in ~/.bashrc file that must be removed.

If you have multiple WSL distros, set the default one to open with the command line or power shell:

If using WSLtty, don’t forget to update your shortcuts and default context menu.

This is not related to WSL. You can follow any of the official instructions to update (e.g.) from Bionic Beaver 18.04 to Focal Fossa 20.04.

Make a backup before you upgrade!

You may need to uninstall screen to get do-release-upgrade to work in WSL:

After the upgrade, you may need to enable 3rd-Party repos.

Edit the files with nano to uncomment repos.